Email Update from Uganda for the “American People”

Maybe it’s because I’ve been away from Uganda too long, or maybe it’s the strong Uganda accent combined with the long-distance voice delay that makes it difficult for me to understand Jesca (manager of Nu Intentions in Uganda) over the phone. So, we’ve resorted to opening her a Yahoo account so we can swap more detailed conversations via email. And since the nearest computer and internet connection from the camp is hours away by truck on a dirt road, it takes an entire day’s journey for her to send a simple email! Quite the contrast of the Blackberry/iPhone luxury that most American’s take for granted.

I wanted to share Jesca’s most recent email with you that provides an update on each of the girls involved in the project. For anyone who owns a pair of Nu Intentions’ earrings or a necklace, Jesca wanted you to see how your simple purchase has positively impacted the girl who made your jewelry. Here’s a snapshot of her words at the beginning of the document she sent me:

Here’s a more polished version of the rest of the update from Jesca:

Miriam – The youngest of them all, Miriam is the furthest in her studies. Now at level Senior 2, she has been able to pay for her school fees and scholastic materials with her earnings from Nu Intentions. My comment: I am not sure if she continued with her popcorn business or not (see last blog post!), but I think it’s such an awesome, yet simple, business idea that is very profitable for her.

Janet – Always the first one to complete her earrings (she even finished before me when I was training her!), Janet can now afford the basic needs to support her two girls and grandmother who has chronic liver problems. She recently finished building a new hut where the four of them live together, and keeps busy with the necessary household chores.

Betty – Being an orphan and eldest of five children, Betty is now the bread winner of her family and is able to afford their basic needs through the support of Nu Intentions. With her earnings from the project, she has started a small business selling staple food products like cabbage, “million fish,” onions, and tomatoes. With the profits from her business, she is able to put money away into savings.

Irene – “My life has never been the same since I joined Nu Intentions.” (And that’s all she wanted to share!)

Mary – Mary recently gave birth to a beautiful baby girl (which I hope to have pictures for you soon!), and is able to afford the necessities for raising a healthy child. Sadly, Mary’s house burned down and she is now using all of her earnings to buy new household properties. If you wish to give a donation to the rebuilding of Mary’s home, please click here and be sure to indicate “Mary’s Hut” in the ordering instructions section.

Sarah – Now the single mother of FOUR children (including my namesake, baby Carrie!), Mary is able to provide healthy meals for her family and medicine for their frequent sicknesses.

Jesca – With the earnings from the project, Jesca tried to start her own small business of selling smoked fish but eventually failed. She hopes to be able to start again with a new business idea. She also talked about saving enough to go back to school someday, since she was just short of graduating from high school when she became pregnant with her baby boy.

Judith – With the standard pregnancy sickliness FINALLY over, Judith is now able to focus her energy on raising a healthy child and can afford basic needs. Her new husband unfortunately lives in the town of Soroti, which is a couple hour truck ride away. Judith is torn because she doesn’t want to leave the project or her mother and grandmother who still need her help at home in the camp. (I hope to provide everyone with an update soon on what she decides to do.)

After not having written for a quite a while, and after much demand, I have decided a long post is deserved. I hope you read it up to the last word, because the last note holds very close to my heart.

My dear friend, Amelia Hirsch, who first introduced me to this small refugee camp, called Kapelebyong, just arrived back in the US from her fourth journey to Uganda. While there, she continued her work at the local school, shared Christ’s love with everyone around her, suffered from another case of malaria… I could go on, but I’ll let you hear it from her on her blog: http://ameliatouganda.blogspot.com/.

On top of all her long-lasting commitments with the camp, she also helped to work with the young women of Nu Intentions! I wanted to share just a few of these beautiful pictures she brought back showing the progression of the Nu Intentions project in Kapelebyong over the past half-year since we left.

Amelia’s friend, Allison Kettwig, joined her on this trip and designed these t-shirts for each of the girls with our original logo. And in Africa, you can wear your t-shirt for an entire week without anyone commenting on it! 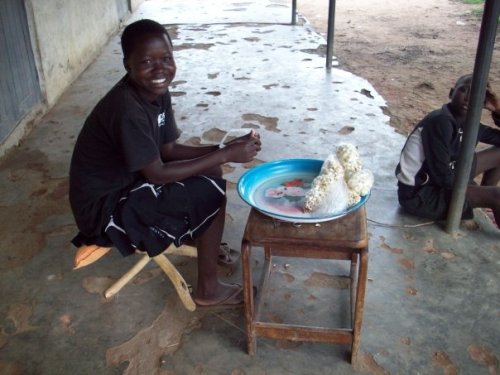 With the income from making Nu Intentions’ jewelry, Miriam was able to begin her own popcorn-selling business within the camp. She’s known as the “popcorn girl” and is in high-demand. She gets the popcorn kernels from in town (2-4 hours away by truck on a dirt road, depending on the day), pops them over hot charcoals, and sells individual-size bags to the camp’s locals. 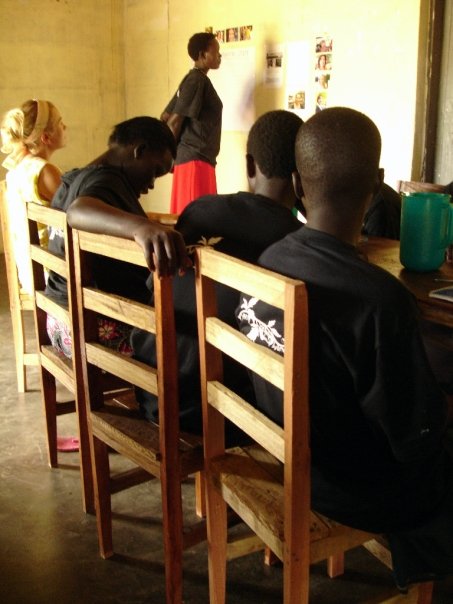 The girls are gathered in our workshop while Jesca, one of the jewelry makers, translates a letter from me to the rest of the girls. They have posted my letter on the wall, in addition to the other pictures I send them of American women wearing their jewelry. So if you own a pair of Nu Intentions’ earrings, take a picture wearing them, email it to me, and I’ll send it to them. They cherish every photo with pride and display them on the walls of the workshop for everyone to see.

Recently after we left from our first trip to Uganda, Sarah gave birth to a healthy baby girl and named her Carrie! Just as Esther named her baby girl after Amelia, it is in their culture to name a newborn after someone who has impacted their life in some way. 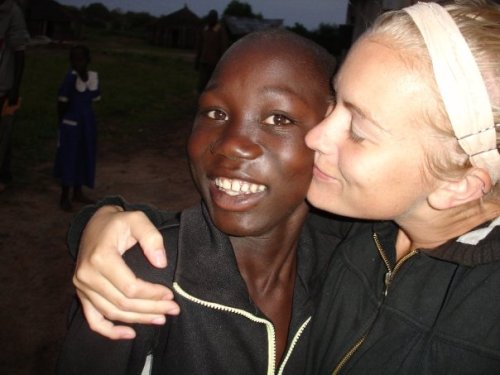 This young boy named Job is loved more than he’ll ever know. Just as Job in the Bible endured hardships, this 13-year old boy has experienced nothing but trials and loneliness most of his life. After both of his parents were charged as “mentally unstable” due to various traumas, Job was declared an orphan, having to fend for himself by digging daily (7 days/week) in the garden many kilometers away. Just to feed himself. After meeting this shy boy and finding out he didn’t go to school because he had to dig, I agreed to pay for him to go back to school ($5!!) if he would sweep the front step of the Nu Intentions workshop every day. He is now back in school, eating well, and is looking sharp in this new jacket Amelia bought for him.

I will be posting another story soon about Job and this new life-changing perspective I’ve found through spending time with him.

All I Want for Christmas is NU

In today’s slowing economy, all of us our watching our pockets especially around the holiday. It is not that we don’t want to give any change to the Salvation Army Santa outside the stores during the holiday, we just aren’t sure what we have to spare when it comes to bills, expenses, and saving for Christmas or any other holiday presents.

Have you ever thought of doing both? This Christmas purchase presents for the holidays through company’s that give the gifts that keep on giving. Here the top 5 online stores I recommend:

1) Toms Shoes: Price Range () Not only are you clothing your loved ones in new shoes over the holidays but children in third world countries.

2) Acholi Beads – Give the gift of the smile with these gorgeous bracelets and necklaces as well as provide an income for the Acholi tribe.

3) Corridor of Hope – Sells handcrafts made by people in third-world countries to help provide them income for basic necessities, resources and opportunities.

5) International Sanctuary – Beautiful jewelry made by survivors of human trafficking and sexual exploitation in India.

Yes She Can: A Nu American Tale

The world cried out in joy as they heard words, “Obama is the President for 2008.” A time for change, hope, and promises for a better tomorrow. Yet, we are still waiting for the world to change, as John Mayer puts it, and she was the first to change it.

Who is “she” you may ask? Nine year old, Julia de la Fuente, of Encinitas, California. Although she is nine years old, her heart and vision are an immeasurable fire to ignite this world to change.

After her school report in class on Ugandan Peace Activist, Betty Bigombe, her classmates were inspired. She shared with her class a YouTube clip of Bigombe and the child soldiers in Northern Uganda. Immediately, her classmates raised their hands and to ask how could they be the change.

This weekend Julia and her classmates rummaged together their old toys to raise $800 in garage sale revenue to donate all proceeds to Bigombe’s work with Resolve Uganda. At nine years old, one girl impacted the future hearts and minds of other nine year olds in America and Uganda in one day. What can you do?

Regardless of your political stance or how you voted this election. Before you put your faith and hope in the political leaders of today, start paying attention to the future leaders of tomorrow. Be ready to be inspired. They are already changing the world, one toy drive, one garage sale, or one jewelry line at a time.

Read more about it in the North County news.

Call and Response with Nu Intentions

In a series of interviews and statistics about the bad and the ugly of
human trafficking, Justin resolved for us as individuals to find what
we are good at, do it, and respond through creative passions to form a
modern abolitionist movement. He led the way by producing the music
and the rockumentary; or as Ghandi best put it, “Be the change you
want to see.”

Immediately, I was excited for our journey called Nu
Intentions. Carrie and I are RESPONDING to the widows and children of
Northern Uganda, the people impacted by the children soldiers and the
LRA. We heard the call, weren’t sure how to respond, but knew we could
make these fantastic earrings. Lo and behold, months later we were
purchasing plane tickets to Northern Uganda, creating a fair trade
busines through a series of events called life, and producing
innovative high-fashion jewelry as beautiful as the people who wear
them.

Ashley Judd closed the film with a line that said, “I
don’t want to wear someone else’s despair.” We believe women’s fashion
should be created one way-guilt free. At Nu Intentions, we did not
design jewelry for high profits, sweatshop labor, slavery or despair.
We created jewelry for a higher purpose: to serve the overlooked and
forgotten women of Northern Uganda, provide them an opportunity to
support their families, and show God’s love and mercy to a world that
needs a lot of it.